The wreck of the Britannic is located at 37°42'05''N,24°17'02''E  in about 400ft/120m. It was discovered by French oceanographer Jacques-Yves Cousteau in 1975. This position is about 3 nautical miles northwest of Korissia (the main port of the island of Kea), about 6.75 nautical miles northwest of the official position given by the Admiralty in 1947 but very close to the position reported by Captain Bartlett in the distress signal.

Digital artwork by William Barney.
The giant liner lies on her starboard side with an inclination of about 85 degrees. The zone of the explosion remains hidden and most of the visible damage is located in the area of the forward cargo holds, where the entire section of the forecastle seems to be attached to the rest of the hull only by some deck plates of the B-deck. The tip of the bow (forepeak) is heavily deformed. According to Dr. Robert Ballard (who explored the wreck in 1995) this damage occured when the bow reached the seabed before the 882ft/269m long liner was completely underwater. As the liner was about to roll-over to her starboard side the bow started rotating and massive forces were applied to the hull, producing extensive cracks to the steel plates at its weakest point, the area already damaged by the explosion. Due to this rotational movement the wrecked hull now points to a direction of 253 degrees, towards the direction the ship was sailing from before meeting her fate.

The crew's quarters in the forecastle were found to be in good shape with many details still visible. The holds were found empty. The forecastle machinery and the two cargo cranes on the forward well deck are still in place and they are well-preserved. The foremast is bent and lies on the seafloor near the wreck with the crow's nest still attached on it. The bell was not found. Funnel #1 lies a few meters from the Boat Deck. The other three funnels were found at some distance from the wreck. 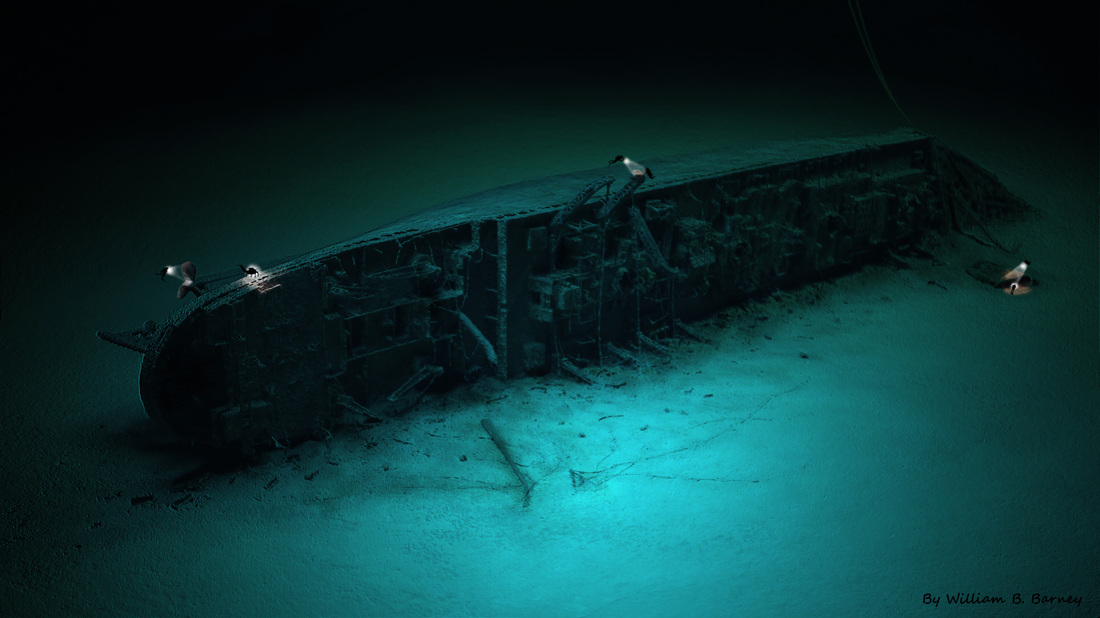 Digital artwork by William Barney.
The rest of the Britannic remains almost intact. Most of the deck houses are in very good condition but isolated points of deterioration were also observed. Most of the wooden structures are long gone but we can see some remains of the wooden floor on the promenade deck. The bridge area, having many wooden walls, suffered time the most. The 4 telegraphs are hanging from their chains and divers found one of the helms. Further aft, in the wheelhouse, the telemotor is still standing (as on Titanic) and on the floor they are visible pieces of decorated red and white tiles. In some area rusticles (formations of rust that resemble to stalactites) were found. These are the products of marine micro-organisms that feed from the iron of the wreckage. Unlike the Titanic, their presence on this wreck appears to be limited. During the 2003 expedition, Carl Spencer and Zaid Al-Obaidi located the multiple tuner from the ship's Marconi installation. During the same expedition, divers Richie Stevenson and John Chatterton managed to swim inside the firemen's tunnel and then into the vestibule separating the entrance/exit of the firemen's tunnel from Boiler Room #6. The two watertight doors in this area were found to be wide open. Inside Boiler Room #6 the huge boilers were still on their foundations, despite the fact that the Britannic was lying on her starboard side for decades. This dangerous penetration stopped only meters before the next watertight door (into Boiler Room #5). John Chatterton returned during the 2006 expedition, when he and Richie Kohler followed a diffrent path in order to reach this door. Unfortunately their way was blocked by debris and they had to abort.

Composite sidescan of the wreck made during the 2003 diving expedition (courtesy of Bill Smith).
The three propellers are still in place and the rudder is turned to port. Most of the davits are turned outwards and many of them are in good condition. On the promenade deck (used as a ward) the metal frames of the beds indicate the nature of the ship. On the Boat Deck the four legs of the compass platform and many deck railings are also in place. The weather cover over the glass dome of the forward Grand Staircase was found nearly intact. The dome was found broken, but there was still evidence of the white glass in some places. Unfortunately, most of the interiors of the ship were not explored as debris was obstructing most of the entrances and many parts of the hull were covered by fishing nets. On the stern docking bridge all the machinery is missing. The nearby Shade Deck is in excellent condition. The mainmast has fallen and lies on the seafloor. The four cranes in this area are still firmly attached in their places.

The red dot indicates the actual position of the wreck, off the bay of St. Nicolo' at Kea (photo by Michail Michailakis).
The coral-encrusted hull hasn't lost the familiar shape of the Olympic-class liners. In 2008, the Hellenic Centre of Maritime Research (HCMR) made a scientific study of the animals and plants living on the wreck. The researchers observed that in the lower sections of the hull's surface the organisms have formed a very thick layer, which is quite likely that it will continue to exist even after the complete corrosion of the metal. The wreck of the Britannic will certainly disappear one day but thanks to nature a visible trace of this magnificent human creation will remain for many years.

One year later, the exploration of the Britannic claimed its first victim, when Carl Spencer lost his life during a dive to the wreck. His death shocked the diving community in England and around the world, as he was considered one of the most experienced technical divers.