Birth of a giant

The three ocean liners built for the White Star Line reflected the British social structure at the beginning of the new century. That period was marked by the influence of King Edward VII. Around him was developed a group of conservative industrialists who had a unique goal: the geographic and economic domination of the British Empire around the world. The effects were devastating for the lower classes and the contrasts were not few. The victory of the opposition in 1906 and the King's death in 1910 led to the introduction of the welfare state and more democratic measures. But tension remained high and the nation was paralyzed by a series of strikes during 1911-12. Immigration to America increased dramatically, especially from Ireland. At the same time rich Americans became regular users of the Atlantic line. So it's not surprising under these circumstances that the new ocean liners had to be more luxurious for the rich passengers and much bigger for the immigrants. Velocity was still a crucial factor but the introduction of steam engines had solved this problem some years earlier. Cunard and White Star followed different paths. Cunard depended mainly on velocity in order to attract customers. White Star opted for extreme luxury and size combined with competitive speeds. On the Olympic-class liners the accommodations for first and second class passengers were unique and even third class passengers, who were usually making the trip in difficult conditions, had their own open deck, a comfortable dining room, larger cabins, a separate sector for single female passengers and sanitary services much above ordinary standards. As a result the cost of the trip was high ($4350 to $3100 for first and second class, $32 for third class) for the economic standards of the time.
On April 14th,1912, the Titanic struck an iceberg and sank after two hours and forty minutes during her maiden voyage in the North Atlantic. The accident claimed the lives of 1502 people, the largest maritime disaster for 75 years. The shock was great because the ship was considered unsinkable by experts and had a huge impact on the improvement of safety measures on ships worldwide. The British and American that followed the disaster investigations pointed out:

1)Non-efficient design of the watertight bulkheads. None of them reached the Bridge deck, so as not to divide the 1st class areas. As a result the ship's hull was NOT fully divided into watertight compartments and water could overflow from a flooded compartment to the next one from the top edge of the bulkheads.
2)Lifeboat capacity was around 50% of the ship's total number of passengers. The outdated British regulations anticipated that ships larger than 10.000 tons should be carrying a total of 16 lifeboats. The White Star had actually exceeded this limit by adding 4 collapsible lifeboats.

The keel of the Britannic had been laid in yard number 433 on November 30th, 1911. She would join service in the summer of 1914 but the tragedy forced White Star to make extensive design modifications. This was much more difficult for the already operating Olympic, which had to stay out of service for six months. On the other hand, the construction of the Britannic was in a very early stage. The structural improvements on both ships were a top priority project for the White Star, considering that the company was suffering a difficult period for its public image.

Image courtesy of the 2003 diving expedition.
One of the most important modifications was the installation of an extended watertight double skin which ran the length of the boiler and engine rooms (60% of the ship's 852ft/269m total length) and rose 4ft/1.2m above the load line. The arrangement of the watertight bulkheads (16 in total) was completely revised too. A new bulkhead was added in the electric room engine and five bulkheads were extended up to the B-Deck. With the new arrangement the ship was divided in real watertight spaces and she should be able to survive a damage similar to the Titanic remaining afloat (but not in motion) with any six compartments flooded. 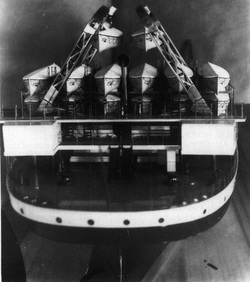 The most visible modification were the huge lifeboat davits. The Britannic could carry 46 open lifeboats (plus two motor launches with their own wireless). The lifeboats were positioned in eight stations (four on each side) on the boat deck. Each davit could handle more than one lifeboat and in two stations (those not located near the funnels) lifeboats could be transferred from one side of the ship to the other. This arrangement allowed for large open spaces for the passengers on the Boat Deck and made possible boarding the lifeboats while still on deck. Then the full lifeboat could be lowered at a safe distance from the ship thanks to two separate motors and not manually. Finally a light fixed at the end of each davit would make the operation easier at night. The installaton of the new type of davits could guarantee a rapid and safe evacuation of all passengers and crew. 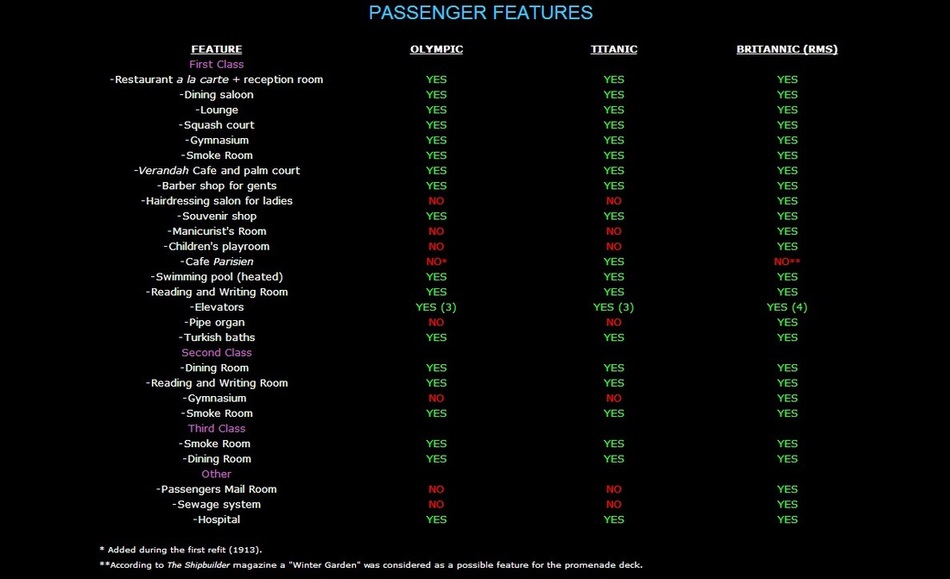 With all these modifications the gross tonnage would arrive near 50.000 tons making the Britannic the largest British ocean liner. On February 26th, 1914 (at 11.15 a.m), the Britannic was finally launched at Belfast nearly 27 months after her keel had been laid. Just 81 seconds later the hull was afloat and five tugs towed it to the fitting out basin. When completed the ship would have the following passenger capacity:790 first class, 836 second class, 953 third class and 950 crew. She would be ready for service in the spring of 1915.