The race for the Atlantic

The Britannic was the third of the Olympic class vessels, a trio of giant and luxurious ocean liners (which also  included the Olympic and the Titanic) built by the Belfast shipbuilders Harland & Wolff for the White Star Line. The decision for this colossal project was taken in 1907 during a dinner at the home of Lord William Pirrie, chairman of Harland & Wolff. That evening Pirrie met Joseph Bruce Ismay, chairman of the White Star Line and president of the International Mercantile Marine (IMM) -a group of shipping companies owned by the famous American financier John Pierpont Morgan. In 1901 Morgan decided to join the increasing competition between shipping lines for transatlantic voyages between Europe and America. The massive wave of immigration (12 million crossed the Atlantic, heading just to New York, between 1892 and 1920) had made that line very profitable and the supremacy of the two leading British companies Cunard Line and White Star Line was already under serious threat by German, French and Italian companies. In 1902, three years after the death of Thomas Henry Ismay (founder of the White Star Line) his son Bruce decided to accept the offer made by the IMM and sold the company. This development left Cunard as the only independent British line. 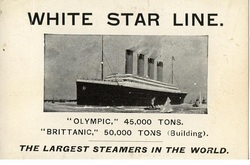 Image courtesy of Gregoire Patrigot.
The British government made an agreement in order to ensure that the ships of the White Star  Line would remain on the British register and would be available in case of a national emergency. In return the White Star would not be treated as a foreign company. In addition, the British Government loaned Cunard £2,600,000 for the construction of two super liners. With this support Cunard launched in 1907 the Lusitania (31500 tons, 24,5 knots) and the Mauretania (31938 tons, over 24,5 knots), the largest and fastest ocean liners in the world. The White Star had to react and with the enormous economic resources of the IMM entered the battle in 1910 with the Olympic (45324 tons, 22 knots) and the Titanic (46328 tons, 22 knots) in 1911. A third ship would follow in 1914, the Britannic (48158 tons, 22 knots). Cunard didn't stand still and responded by starting the construction of a third liner, the Aquitania (45647 tons). However, the future would reserve many surprises for both companies and this balance wouldn't last for long.
Despite the huge investments of the two major British companies, it was the German Hamburg-Amerika  Line (run by Albert Ballin) that first introduced the concept of "the biggest and the best". The Germans (Hamburg-America Line and Norddeutcher Lloyd) had already overtaken the British several times during the course for the Blue Ribband, the prestigious prize for the fastest crossing of the Atlantic. The construction of the two British trios of super liners forced Ballin to react. His project was even greater as the race for the Atlantic had become a matter of national pride. Three super liners, over 50000 tons each, were designed for Hamburg- Amerika Line: the Imparator (52117 tons), the Vaterland (54282 tons), both launched in 1913. Then the Bismark (56000 tons) launched in 1914. Here is the data for the four competitors in 1914:

The ambitious plans of Albert Ballin were ruined by the outbreak of WW1 in 1914. He died in 1918 and never saw the fate of his super liners. After the war two of them were awarded to his British rivals, both of whom had lost one of their large liners during the hostilities. The Imparator was awarded to Cunard (who had lost the Lusitania) and was renamed Berengaria. The White Star (who had lost the Britannic) was awarded the Bismark, renamed Magestic. The Vaterland was seized by the Americans in New York and was renamed USS Leviathan. She transported more than 100.000 soldiers to France and after the war she served with the American Line. The Cunard Line was the luckier of the British companies. With the Mauretania and the Aquitania still intact (plus the Berengaria) the company could still meet the high pre-war standards of service. On the other hand, the White Star Line, having lost the Titanic before the war and the Britannic during the conflict, remained with only one of its super liners, the Olympic. The Magestic made profit but that was not enough to stop the slow decline. The final act was written in 1934 when White Star and Cunard merged.