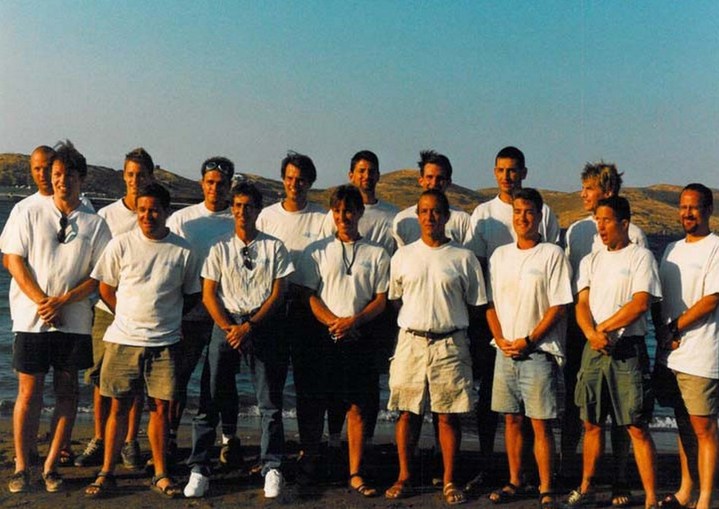 Support vessels: A Greek caique and a RIB.


This team chose to operate without an anchored deco station. During the decompression stage the divers simply followed the line when water currents were limited and used a drifting deco station (marked with Surface Marker Buoys) only when the currents were stonger. Diver support operations were provided by the RIB. A Greek caique was the main support platform. The gas menu was the following:

The team performed aprox. 60 dives, with bottom times ranging between 30 to 45 minutes. With decompression times included, each diver had to pass aprox. 6 hours in the water. 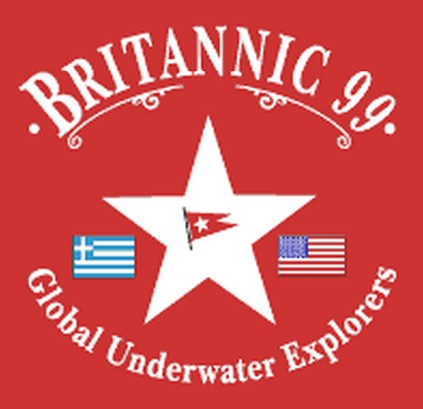 The logo of the expedition (©1999 GUE, courtesy of Jarrod Jablonski).
With most of its members being experienced wreck and cave divers, this team spent a significant amount of bottom time exploring the interiors of the Britannic. It was the first time since the sinking of the ship that the forward cargo hold (Hold No.1) was explored and filmed. The video footage showed that the hold was in excellent condition. Even further aft, into the damaged areas were the Holds 2 and 3 were once located, divers observed parts of the hull still preserved in good condition. No evidence of any kind of cargo was found in the holds or inside the adjacent debris field. In addition, the hatch to the reserve coal bunker (Hold No.3) was found intact and in position, a clear indication that no explosion took place inside it. These very important findings led researchers to embrace Dr. Ballard's theory, that the massive hull damage was the result of the dynamics of the sinking and not of a secondary explosion, due to explosive cargo, stored munitions or coal dust.

Divers also tried to reach the deepest areas of the wreck through the funnel casings but the funnel uptakes were found intact and they were unable to make progress. The Grand Staircase and the ship's bridge were also explored and filmed. Other activities that took place were the exact measurement of the damaged bow section and the retrieval of coal samples, steel and rivets for scientific testing. The film footage from the expedition was used for the production of the 2002 documentary Inside the Britannic [﻿IMDb﻿].