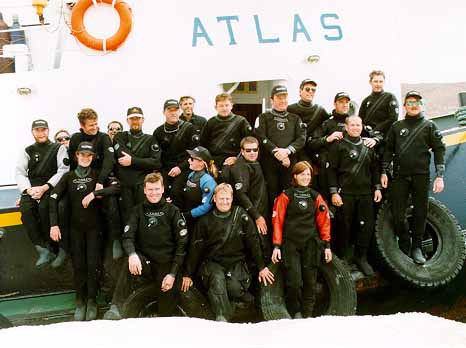 The team of the 1998 expedition (DIVER magazine)
THE TEAM

Support vessels: The ATLAS (a tugboat provided by Tsavliris Maritime), the CHRISTINA (a Greek caique) and a RIB.


The team opted for the deployment of an anchored decompression station, kept afloat by large buoys. The divers would be fastened to the station's four anchor lines through smaller lines (known as "Jon" lines after their inventor, Jon Hulburt). These short lines were about 1m/3ft long, with two clips at each end and they were very useful because they relieved the divers from constantly holding on the anchor line during decompression stops in strong water currents. Free-floating decompession has been dismissed as unsafe, due to the frequent passage of large merchant ships near the diving site. The RIB was used to deploy the decompression station and for picking up the divers from the water, while the caique allowed the team to operate under strong winds and immediately resolve problems with the decompression station, which was vulnerable to the strong currents of the Kea Channel.

The selected gas mixture for the exploration of the wreck was HeliAir 9/57 (Oxygen 9%, Helium 57%, Nitrogen 34%), which is a Trimix with a fixed 21:79 ratio of Oxygen and Nitrogen (air is composed of 21% Oxygen and 79% Nitrogen). It is prepared simply by adding the desired quantity of Helium into a scuba tank and then topping it off with air. Besides its practical advantages, HeliAir is known to reduce the effects of Nitrogen Narcosis and to reduce the risk of Oxygen toxicity. For the decompression stage Nitrox (a gas mixture of Oxygen and Nitrogen) was also used. This is the "Gas Menu" used during the expedition: 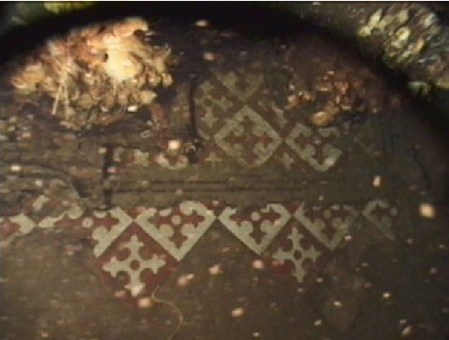 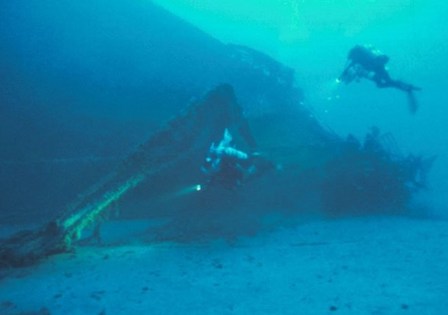 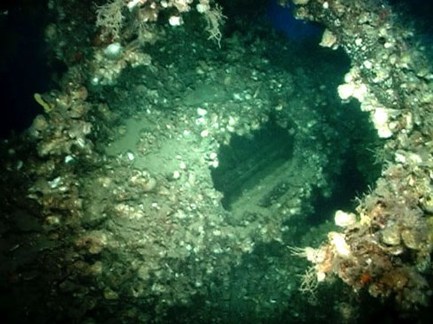 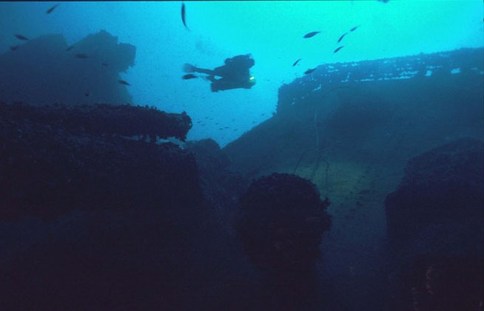 Approaching the forecastle from the break (©1998 Rob Royle)
The team made 78 dives (1600' of bottom time in total), despite the difficult weather and the frequent equipment failures caused by the great depth. This was the first expedition featuring amateur divers and a female diver (Christina Campbell, who also set a depth record for a female diver by diving to 118m). In addition, it was the first time a rebreather was used while diving to the Britannic. A rebreather is a device that absorbs the carbon dioxide exhaled by the diver and recycles it in order to reuse the remaining oxygen content present in each breath.

One of the goals of the expedition was to locate a way into Boiler Room No.6 and see if the watertight door between that room and Boiler Room No.5 was open or not. This task was assigned to John Chatterton, who was equipped with a rebreather. His plan, once diving into the break near the ship's bow, was to locate structures that would allow him to identify the decks and then proceed to the direction of the keel in order to find a possible entrance into the firemen's tunnel. Helped by the information provided by Chatterton's first dive, John Yurga examined the bulkhead between Hold No.3 and Boiler Room No.6 and noticed one of the horizontal-sliding watertight doors being partially closed (with a gap of about 0,3m/1ft) and an opening one deck below it. When John Chatterton returned to area he found out that this opening was actually leading inside the fireman's tunnel. The narrow passage was partially blocked but he managed to arrive close to the watertight door between the end of the tunnel and the watertight vestibule, located before the entrance into Boiler Room No.6. The risk to proceed further aft was considered too high but he was able to notice what he thought was a partially open door.

Some team members tried to locate the letters of the the ship's name on the port bow but with no success. The forward mast and the crow's nest were also examined but the ship's bells were nowhere to be found. Several divers used DPVs and managed to explore large sections of the enormous wreck. An ROV was also deployed by the Greek support team but without great results. As it was expected much attention was given to the forecastle, the bridge, the boat deck, the port enclosed promenade (with its interior walls presenting signs of extensive deterioration at some points) and the stern area. Dave Wilkins dived inside the opening left by the collapsed fourth funnel and despite the presence of debris he managed to arrive only meters from the Engine Room and to observe the forward ends of the cylinder heads of the enormous reciprocating engines. Unfortunately, the side openings were too small in order to continue into the Engine Room and he decided to return back.

The team made a documentary, titled Titanic's Sister: HMHS Britannic and produced by Periscope Publishing Ltd.