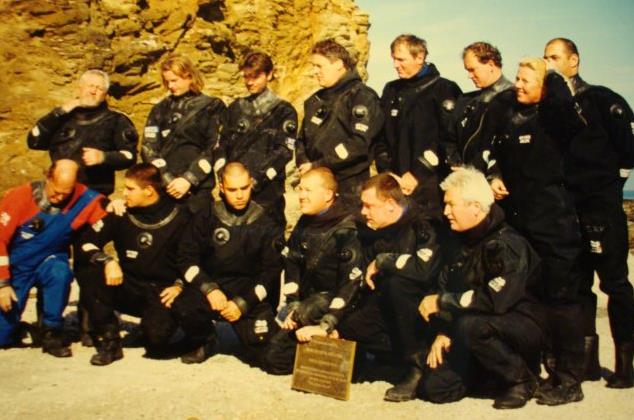 The expedition took place in November 1997 and lasted three weeks. The main goals were to make a complete video survey of the wreck and to explore the damaged area near the bow. Since the actual bottom-time was measured in minutes, the filming of the huge liner required special equipment that would allow the divers to move fast. This was achieved through the use of Diver Propulsion Vehicles (DPV) equipped with digital cameras. Another major challenge was the decompression process (3 to 4 hours) inside an area with strong unpredictable water currents and located in the middle of a very busy shipping lane. Since the team had not the resources available to Jacques Cousteau back in 1976 (his team was using a "diving bell" in order to reach the surface fast and the decompression was then completed safely inside the hold of the support vessel), it was decided to use a RIB as a floating decompression platform. This RIB was moored constantly to one of the lines attached to the wreck and it was equipped with bars underneath it (deco bars). Multiple supply lines were attached to these bars, allowing the surface team to send the tanks containining the decompression gases to the divers below. However, the strong water currents and the waves created by passing tankers often caused the RIB to drift outside the one-mile shipping exclusion zone, for a distance of up to 7 miles.

In total, five days were spent for the exploration of the forward section of the wreck (from the bow to the bridge area) and two days for the exploration of the stern area. The team made a total of 40 dives, passing more than 800 minutes at depths greater than 90m/300ft, using Trimix 11/60 (a gas mixture containing 11% oxygen, 60% helium, 29% nitrogen) during the exploration of the wreck. For the decompression stops they used air and Nitrox (a gas mixture containing nitrogen and oxygen). The entire decompression process was described by team leader Kevin Gurr in the February 1998 issue of the diving magazine "DIVER" (the Nitrox number refers to the percentage of oxygen in the mixture):

"At about 70m, where we did micro-bubble controlling stops, we felt like tiny specks in the blue. Then at around 60m the first decompression stops would begin. There would be a switch to air at 51m then to nitrox 40 at 30m, and finally to nitrox 80 at 9m. The last three stops were on the deco bars under the RIB at 9.6m and 4.5m."

The video footage from the dives allowed researchers to evaluate more accurately the nature of the hull damage created by the dynamics of the sinking. Penetrations inside the more accessible areas were also performed and with the digital technology now available the first clear images of the interiors were obtained. Divers also tried to find a way into the Boiler Rooms (in order to examine if the watertight doors were open or not) but without success. In addition, it was documented that the rudder was turned to port by almost 10 degrees, possibly in order to compensate a drift to starboard, caused by the ship's list. A wide sonar scan search was performed but no remains of underwater mines were detected. However, this search managed to provide more details regarding the direction of the debris field and also documented the existence of a large piece of the hull, located about 91m/300ft off the side of the wreck. Unfortunately, the video documentary produced by the team has not been published to this day, although some bits of it were included into other productions (the History Channel documentary "Doomed sisters of the Titanic" and the movie "Britannic"). The team also left a memorial plaque dedicated to Jacques Yves Cousteau and a Greek flag. Team members also gave speeches to local schools about the project. The expedition had an important impact on the global diving community because it showed that a privately organized expedition to the Britannic was possible for a group of technical divers, even without the huge financial and technical resources that were available to the great explorers, such as Cousteau and Ballard. 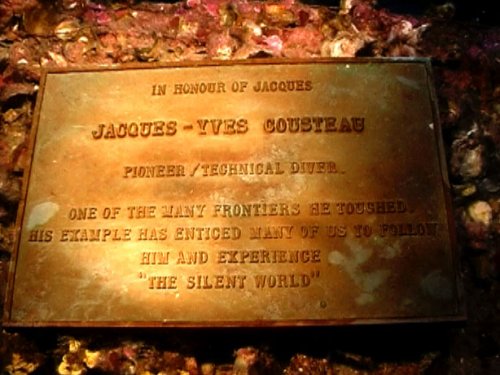 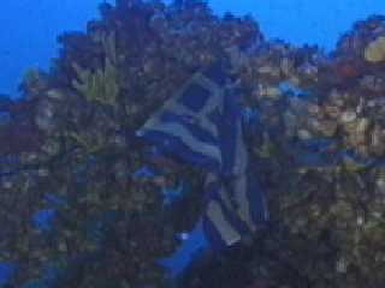 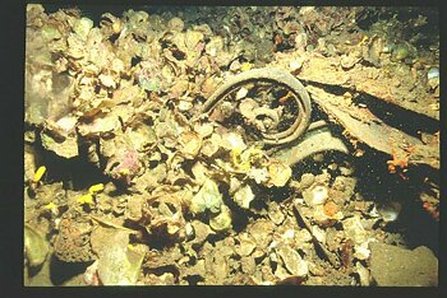 Part of a bench hidden under marine growth. (©1997 Dan Burton) 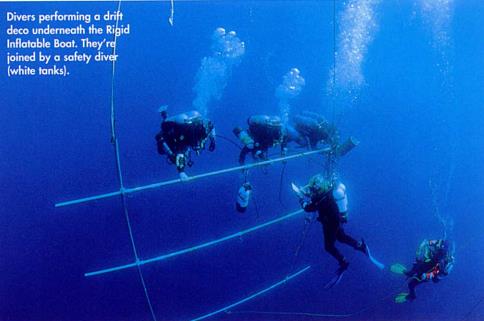 The deco bars located under the RIB (Source: ADVANCED DIVER MAGAZINE)
More photos from the Project Britannic 1997 can be seen here.